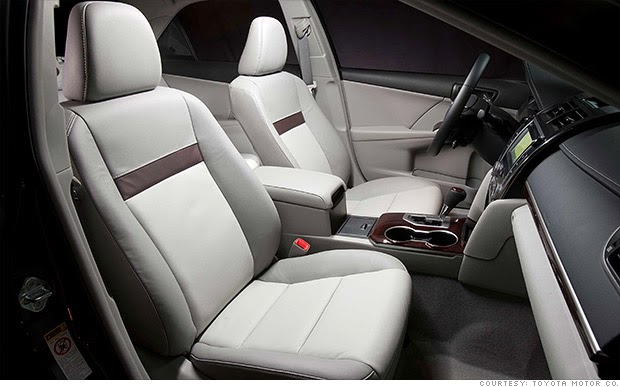 Toyota has told North American dealers to stop selling six popular models with heated seats because a soft material beneath the seat covers does not comply with U.S. safety standards, company spokesman John Hanson said.
No fires or injuries have been reported yet, but cars that don't comply with U.S. safety codes can't legally be sold in the country. The company is still totaling how many vehicles are affected, but it will be in the thousands, according to the spokesman.

The stop-sale order could mean trouble for Toyota and its dealers because it covers the company's top-selling vehicles. The stop-sell order includes certain Camry, Avalon, Sienna and Tacoma models from the 2013 and 2014 model years, as well as Corollas and Tundras from 2014.

The company already has a new material that's being installed at factories and will be put in cars that are on dealer lots. "We don't think it will take long to get the parts and make the changes," Hanson said, without getting more specific.

As for vehicles already on the road, Toyota has reported the problem to the U.S. National Highway Traffic Safety Administration which will decide if the sold vehicles should be recalled. A NHTSA spokesman said he would check into the matter.


If you have suffered any sort of injury as a result of a Toyota defect, you need to contact a defective products lawyer as soon as possible to schedule a free initial consultation.


The stop-sale order affects cars and trucks distributed to dealers in the U.S., Canada and Mexico. In addition, some vehicles were exported outside North America. The problem was discovered by safety regulators in South Korea, who disassembled seats and tested individual fabrics. U.S. safety standards require fabrics to resist flames at a certain rate, but the one fabric didn't meet the standard. The affected vehicles were sold since August of 2012, when the fabric supplier was changed.

Toyota has been struggling to regain its reputation for quality since 2009, after announcing massive recalls over several years for a variety of defects including braking, accelerators and floor mats. The company has already been fined for being slow on recalls, which affected more than 14 million vehicles, and faces lawsuits.

Toyota is the world's top automaker, ahead of General Motors Corp. and Volkswagen AG in global vehicle sales. The company has promised to be quicker with recalls and more careful with model development to avoid a recurrence of its troubles.


Because of the multiple legal issues involving vehicles produced by Toyota Motor Corp., we have developed a separate website to deal specifically with these cases. For more information please visit toyotainjuryattorney.com

Email ThisBlogThis!Share to TwitterShare to FacebookShare to Pinterest
Labels: defective products, product liability, Toyota Recalls
Newer Post Older Post Home
Brent Cordell practices exclusively in the area of personal injury law. His number one focus is helping people with severe injuries get the legal representation they desire. Throughout his career, Mr. Cordell has helped thousands of injured people get the just compensation they deserve.